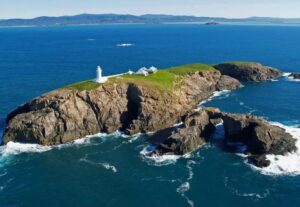 Drone video and still pictures will be available soon.

The island radio group were given permission from the NPWS office in Coffs Harbour. Access to  Solitary Island was by local helicopter company, Precision Helicopters. The 23 acre South Solitary island is 18km north east from Coffs Harbour is only accessible by helicopter, the trip taking about 15 minutes. Solitary Island is one of two island lighthouses off the New South Wales coastline, the other being Montague Island on the south coast.

The South Solitary Lighthouse number for the event was AU-0054 and being an isolated lighthouse there were a large number of remote radio operators attempting to contact the group on the island.  Our presence on the Island was from Lunchtime Friday August 19th until Lunchtime on Monday the 22nd. We operated from the now vacant head-lightkeepers cottage which is adjacent to the lighthouse and made over 100 contacts.

HF frequencies were mainly on the 80m, 40m, 20m bands at different times, using a G5RV antenna on an extendable pole.  Operation on the 2m VHF band using FM and SSB  modes took place  throughout the weekend for line of site contacts up and down the coast,  using a 5/8 G/plane antenna mounted on a large camera-tripod.

The ILLW operating hours were ..

I have been to the island 10 times in my working life as a Telstra technician, looking after the radio telephone system with its solar  powered battery system. My first trip was in 1968, by the motor launch “Pamels Star”. This 18km trip took well over an hour from  the harbour at Coffs. On arrival at the island we were lifted up 15m in cane basket, by crane, and then swung around onto the steel jetty.  A similar operation took place in reverse when leaving the island. This could be quite alarming on a rough day, especially on landing back on the boat on leaving the island. Trips like this were always dependent on sea and wind conditions.  This island Jetty has now rusted away and only the rusted base remains. More recently however, the island is serviced by helicopter and the trip takes about 15 minutes. Very different from years ago.

Logbook for the ILLW weeknd is now visible at www.clublog.org